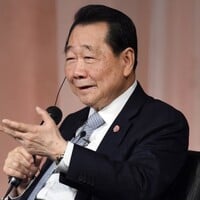 Dhanin Chearavanont net worth: Dhanin Chearavanont is a businessman who has a net worth of $12.1 billion dollars which makes him the richest person in Thailand. Born in Bangkok, Thailand, Dhanin Chearavanont is CEO and Chairman of the Charoen Pokphand Group. Chia Ek Chor and Chia Seow Hui, Dhanin Chearavanont's father and uncle, respectively, moved from China to Thailand in the 1920s, and launched their own seed selling business. They expanded the business over time, branching out into agricultural chemicals, farming technology, and contracting with various farming conglomerates. The company expanded throughout Asia, and in the 80s, became the go-to Asian agricultural company for such international companies as Wal-Mart, Tesco, and Honda. The Charoen Pokphand Group now has holdings in the Shanghai Superbrand Mall, seventy-seven Lotus supermarkets, and it overseas 6,000 7-Eleven stores. The company has diversified to include telecommunications, marketing, distribution, international trading, petrochemicals, insurance, and pet foods, among many other holdings. The success of CP Group has made Dhanin Chearavanont the richest man in Thailand.