How much is Dean White Worth?

Dean White net worth: Dean White was an American billionaire who had a net worth of $2.5 billion dollars at the time of his death in 2014. That made him one of the richest people in Indiana. He was 93 years old at the time of his death which made him one of the 15 oldest billionaires on the planet. Dean White graduated from the United States Merchant Marine Academy and spent most of his life living in Crown Point, Indiana. He began working for his father's billboard business, Whiteco Advertising Company, in the mid-40s. His father challenged him to make a million dollars by age 40, and he set about doing so. After assuming leadership of the company in the early 50s, he focused a percentage of the company's profits on real estate development, primarily in hotels. His gamble paid off big time. At one point Dean's company launched a massive $450 million five-hotel complex in Indianapolis that includes the JW Marriott's largest hotel property, with 1,005 rooms. The property is steps from Lucas Oil Field, and the February 2012 opening included a performance by Diana Ross. He sold his father's billboard business for $960 million in 1998, and sold 100 of his hotel properties in 2006 for $1.7 billion. Dean White died on September 14, 2016. 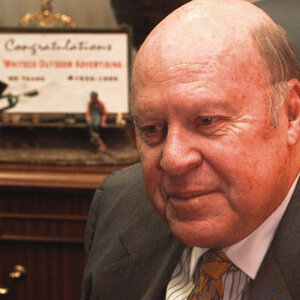