What is Dara Khosrowshahi's Net Worth and Salary?

Dara Khosrowshahi is an Iranian-American businessman and CEO who has a net worth of $250 million dollars. On August 27, 2017, Dara was announced as the new CEO of ride sharing company Uber. Before becoming CEO of Uber Dara was the CEO of Expedia Group, an online travel shopping company that owns a number of travel fare aggregators. Khosrowshahi also sits on the board of directors of Hotels.com and BET.com, and formerly served on the board of the New York Times Company.

His annual base salary at Uber is $6.7 million. Upon joining Uber, Dara owned $85 million worth of vested Expedia stock options. He left behind an estimated $160 – $200 million in unvested stock options on the table when he left Expedia for Uber. To make up for this loss, Uber offered Dara a pay package that could ultimately exceed $200 million in incentive compensation.

On May 10, 2019 Uber became a public company. Khosrowshahi's employment contract entitles him to receive an estimated $100 million bonus if Uber's valuation hit $120 billion and stays there for at least 90 days, or if the company happens to be sold outright for that figure.

Dara Khosrowshahi was born on May 28, 1969 in Tehran, Iran as the youngest of three children of Muslim parents Asghar and Lili. He was born into wealth, as his family had founded the diversified conglomerate group Alborz Investment Company. Just before the Iranian Revolution in 1978, his family was targeted for its fortune; as a result, Khosrowshahi's mother chose to leave behind everything and flee the country. The family ended up first in southern France, and then in the United States, where they moved in with a relative in Tarrytown, New York. There, Khosrowshahi went to the Hackley School, a private college preparatory institution. He subsequently enrolled at Brown University, from which he graduated in 1991 with a BS degree in electrical and electronics engineering.

Following his graduation from Brown, Khosrowshahi joined the investment bank Allen & Company as an analyst. He spent seven years there, and then left to work for one of his former clients, Barry Diller. Khosrowshahi first worked at Diller's USA Networks, serving as senior vice president for strategic planning before becoming president. Later, he served as the chief financial officer of Diller's holding company IAC.

In 2001, IAC purchased the online travel agency Expedia; four years later, Khosrowshahi took over as CEO of its parent company, Expedia Group. Among the websites owned by the group are travel fare aggregators such as Hotels.com, Hotwire.com, Travelocity, trivago, and Orbitz. In 2015, Expedia gave Khosrowshahi $90 million in stock options as part of an employment agreement contingent on him staying with the company until 2020.

During his tenure at Expedia, Khosrowshahi was one of the highest paid CEOs in the United States. Moreover, Expedia experienced significant growth, with the gross value of its travel bookings more than quadrupling and its pre-tax earnings more than doubling. The company also expanded its presence to over 60 countries around the world. 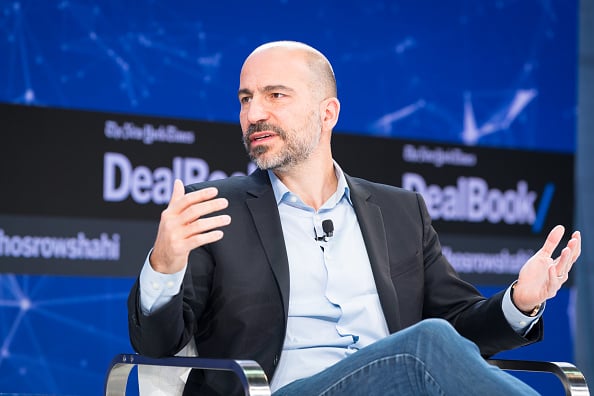 In August of 2017, Khosrowshahi succeeded company founder Travis Kalanick as CEO of Uber. Although he forfeited his unvested Expedia stock options, which were worth $184 million, Uber reportedly paid Khosrowshahi more than $200 million to take the role of CEO. His candidacy, however, was fraught with controversy, as the initial frontrunners Jeff Immelt and Meg Whitman became victims of poor presentations and deadlocked votes. Eventually, the private equity firm Benchmark, which had helped in the effort to push out Kalanick, promised to drop a lawsuit against the founder if the company named Whitman as the new CEO. Many read this as blackmail, ultimately leading to Khosrowshahi's election.

At Uber, Khosrowshahi's main job was to rehabilitate the image of the company, which had become mired in bad press over revelations about its immoral corporate culture. It had been heavily criticized for ignoring or evading local regulations; attempting to sabotage competitors; misleading drivers about their earnings; and not informing riders about data breaches. Additionally, the company faced several allegations of sexual harassment from employees. In May of 2019, Khosrowshahi led Uber in its stock launch.

Khosrowshahi has been involved in some political activities over the years. In 2016, he made donations to the Hillary Victory Fund and the Democratic National Committee, and also donated to the campaigns of Washington Democratic Senator Patty Murray and Republican Senator Mike Lee.

In an interview with news website Axios in 2019, Khosrowshahi stirred controversy when he compared the political assassination of Saudi journalist Jamal Khashoggi to the death of Elaine Herzberg by a self-driving Uber car. Specifically, he drew heavy criticism for calling them both "mistakes" that could "be forgiven." The reason for this claim was that he was appeasing the Saudi government, which invests in Uber and has representation on its board of directors.

From his first marriage to Kathleen Grant, which lasted until 2009, Khosrowshahi has two children: a son named Alex and a daughter named Chloe. Following their divorce, he married former preschool teacher and actress Sydney Shapiro in 2012. Together, they have twin sons named Hugo and Hayes.

Many of Khosrowshahi's relatives are also wealthy entrepreneurs. His uncle Hassan is a billionaire investor and the founder of Future Shop, while his cousin Amir co-founded the artificial intelligence software company Nervana Systems. Another cousin named Golnar founded the music publishing company Reservoir Media. Additionally, Khosrowshahi's relative Darian Shirazi is the founder of the software company Radius.