Brian Souter White Net Worth: Brian Souter is a Scottish businessman and philanthropist who has a net worth of $328 million. (Sir) Brian Souter was born May 5, 1954 in Perth, Scotland. Along with sister Ann Gloag, he founded the Stagecoach Group of bus and rail operators. He also founded the bus and coach operator Megabus, the train operating company South West Trains, his investments company Souter Holdings Ltd and the Souter Charitable Trust.

Stagecoach Group is based in Perth, Scotland with operations in the United Kingdom, the United States and Canada. Souter has been politically active in Scotland and financially supports the Scottish National Party. In 2000, when the Scottish Government proposed to repeal Section 2A of the Local Government Act, which prevented local authorities from promoting homosexuality, Souter started the Keep the Clause campaign to oppose their plans, spending one million pounds of his own money to organize a private referendum across Scotland. This campaign and other controversial statements have led opponents to accuse him of homophobia. In 2011, Souter was awarded a knighthood for services to transport and the voluntary sector, an honor which was criticized by the Scottish Labour Party politicians and by gay rights campaigners. In August 2012, it was announced that Souter would become Chairman of Stagecoach Group on May 1, 2013 and that finance director Martin Griffiths would replace Souter as CEO. In 1992, Souter and his wife set up the Souter Charitable Trust, which assists humanitarian projects in the U.K. and overseas, especially, but not exclusively, those with a Christian emphasis. Projects include the prevention of malaria and supplying daily meals to school children in Africa. On April 18, 2012, Sir Brian Souter was inducted into the British Travel and Hospitality Industry Hall of Fame, the first public transport entrepreneur to receive the honor. 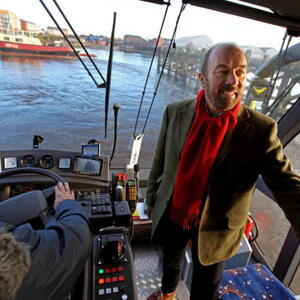