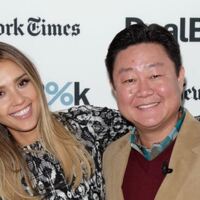 Brian Lee net worth: Brian Lee is an American entrepreneur who has a net worth of $50 million. Brian Lee has co-founded several businesses including Legalzoom.com, The Honest Company, and ShoeDazzle.com. He formerly worked as an attorney and was a manager at Deloitte. Lee graduated from UCLA and earned his J.D. from UCLA School of Law. He co-founded Legalzoom.com with Robert Shapiro who is known for his association with OJ Simpson. Lee and Kim Kardashian started ShoeDazzle.com which was also founded by Shapiro and MJ Eng. Brian Lee founded The Honest Company with Jessica Alba as well as Christopher Gavigan and Sean Kane. In 2009 Lee was named to the 24 Most Notable Korean-American entrepreneurs by Forbes. He was named the Emerging Entrepreneur of the Year in 2014 by EY Entrepreneur of the Year. In 2011 Business Insider ranked Legalzoom.com as 27th and ShoeDazzle.com as 59th on their World's Most Valuable Startups list.