Robert Castellini Net Worth: Robert Castellini is an American CEO and businessman who has a net worth of $400 million. Bob Castellini serves as the CEO of Major League Baseball's Cincinnati Reds after being part of a group that bought the team's majority share. In addition to his baseball venture, Castellini works as fruit and vegetable wholesaler Castellini Co.'s chairman.

He earned his economics degree from Georgetown University in Washington, D.C., and later his MBA from the Wharton School of Business at the University of Pennsylvania. After receiving his degree, Castellini worked for and served as executive vice president of the Castellini Group of Companies. From 1970 until 1992, he was named the company's president. He dabbled in ownership of the Baltimore Orioles, Texas Rangers, and St. Louis Cardinals before heading up the group that made a play to purchase the Reds. Castellini had previously owned a small part of the franchise until the mid-'80s. Prior to the purchase, the Reds had five straight losing seasons, one of the worst stretches in franchise history. Castellini replaced the team's general manager almost immediately after the $270 million-dollar-deal closed, leading to a third place division finish in 2006. By 2010, the team won its first division title in well over a decade. 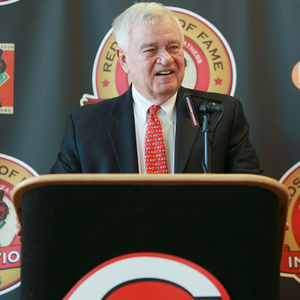