Azim Premji Net Worth: Azim Premji is an Indian business tycoon who has a net worth of $4.5 billion dollars. Born July 24, 1945 in Mumbai, British India, Azim Premji is also a philanthropist who is the chairman of Wipro Limited, a multinational IT consulting and system integration services company. At various times in his life Premji was one of the wealthiest Indians on the planet and one of the top richest people in the world. His net worth peaked at around $23 billion before he started giving vast amounts of money away to charity. He was voted among the 20 most powerful men in the world by Asiaweek and has twice been listed among the 100 most influential people by TIME Magazine (2004 and 2011, respectively). In 2000, he was given an honorary doctorate by the Manipal Academy of Higher Education and in 2006 he was awarded Lakshya Business Visionary by the National Institute of Industrial Engineering, Mumbai. In 2009, he was awarded an honorary doctorate from Wesleyan University in Middletown, Connecticut. Premji's grandfather was a noted businessman and was known as Rice King of Burma. Premji holds a bachelor's degree in electrical engineering from Stanford University, USA and has gone on to receive awards from the India government as well as an Economic Times Lifetime Achievement Award. Premji is married to Yasmeen and they have two children, Rishad and Tariq. Rishad is currently the Chief Strategy Officer of IT Business, Wipro.

Wealth Donation: At its peak, Azim's net worth topped $23 billion which made him the 36th richest person on the planet. That ranking has declined precipitously over the years as Azim has given away more than 80% of his fortune to charity. By mid-2019 his net worth stood at $4.5 billion. 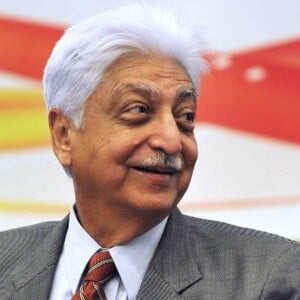