Andre Harrell net worth: Andre Harrell was an American record and film producer who had a net worth of $50 million at the time of his death in 2020. He was notable for being the founder of Uptown Records which helped launch many careers of artists and executives. At Uptown, Andre discovered Sean "Diddy" Combs who rose from unpaid intern to Vice President within a few short years. Unfortunately, Andre died on May 8, 2020 at the age of 59.

Early Life: Andre Harrell was born in Harlem, New York in September 1960. Harrell formed the hip hop duo Dr. Jekyll and Mr. Hyde with his high school friend Quadie Campbell. The group had three hit singles: "Genius Rap", "Fast Life", and "AM/PM". He went to Lehman College to become a newscaster but dropped out. After dropping out he went to work at a radio station as an account executive. In 1983 Andre met Russell Simmons who had just founded Def Jam Records and offered him a job. His starting salary was $200 a week which he ultimately decided to split with Lyor Cohen in order to get him to come on board. Andre rose the ranks and worked for Simmons' company Rush Communications eventually becoming a Vice President and general manager.

Uptown Records: Andre left Rush Communications in 1986 to launch his own label which he called Uptown Records. In 1990 Uptown hired an eager unpaid intern named Sean Combs. Sean, who would later be known as Puff Daddy and then Diddy, would famously travel back and forth between New York City and Howard University in Washington D.C. where he was a business major. He dropped out after his sophomore year to pursue music full-time at Uptown. Combs soon rose to the position of talent director and A&R rep at Uptown. In this position Combs developed acts such as Mary J. Blige and Jodeci. Within two years at the company, Diddy was a Vice President. He was just 22 years old. Diddy was fired from Uptown in 1991 after a charity basketball game ended in tragedy with nine deaths and dozens of injuries. Diddy would soon launch Bad Boy Records which would go on to have enormous success with many artists.

In the meantime, in 1992 Harrell was offered a multi-media deal by MCA and his company became Uptown Entertainment. Through Uptown Entertainment Harrell produced several television shows and movies. One of his biggest TV hits was the series New York Undercover which ran from 1994 to 1998. He soon renamed the label again, this time to Uptown Enterprises. He produced the films Strictly Business and Honey.

Harrell became the CEO of Motown Records in 1995. Two decades after firing him, Andre Harrell was hired by Diddy to serve as Vice Chairman of Revolt, Diddy's multi-platform entertainment network. 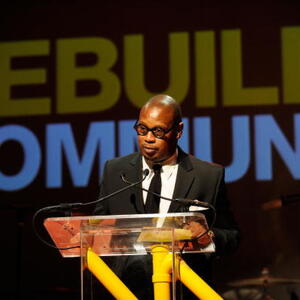