Ana Botin Net Worth: Ana Botin is a Spanish businesswoman who has a net worth of $800 million. Ana Botin was born in Santander, Spain in October 1960. She is the daughter of Spanish banker Emilio Botin who was the former Executive Chairman of Spain's Grupo Santander and Paloma O'Shea, the 1st Marquise of O'Shea.

Ana studied economics at Bryn Mawr College and attended Harvard College at Harvard University. Botin worked at JP Morgan for eight years in the United States. She went back to Spain in 1988 and started working for the Santander Group. Botin became executive chairman of Spanish bank Banesto in 2002. In 2010 she became the successor of Antonio Horta Osorio as the Chief Executive of Santander UK. Ana was named as director at the Coca-Cola Company by their board in 2013. She was appointed chair at the Santander Group in September 2014. In 2005 Forbes Magazine ranked Botin as the 99th most powerful woman in the world. She moved up to #45 in 2009 and in 2013 Botin was named the 3rd most powerful woman in the United Kingdom by Woman's Hour on BBC Radio 4. 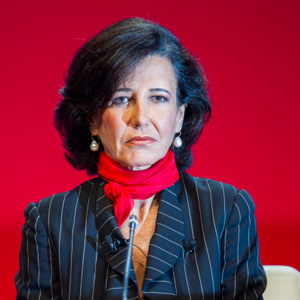