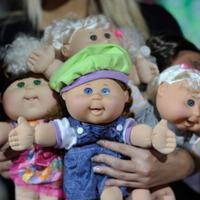 Xavier Roberts net worth: Xavier Roberts is an American businessman and entrepreneur who has a net worth of $50 million. Xavier Roberts was born in Cleveland, Georgia in October 1955. He is best known for inventing and manufacturing Cabbage Patch Kids dolls. Roberts created a doll called Little People and sold them at folk art exhibitions across the southeastern United States. He went into business as Original Appalachian Artworks, Inc. and started producing dolls at a converted medical clinic that he called Babyland General Hospital. The dolls evolved into Cabbage Patch Kids. In 1982, Xavier sold an exclusive license to Coleco toys. In 1984 there were 20 million dolls sold and that total grew to 95 million by 1989. Unfortunately sales of Cabbage Patch Dolls declined greatly by the end of the 80s, causing Coleco to file for bankruptcy. The license was then acquired by Hasbro, followed by 5 other owners and iterations. As for Xavier Roberts, he later created a line of toy bears called Furskin Bears which had some moderate success.