Whitney Wolfe Herd net worth and salary: Whitney Wolfe Herd is an American entrepreneur who has a net worth of $1.5 billion. She is known for co-founding the dating app Tinder and is also the co-founder and CEO of Bumble. When Bumble IPO'd on February 11, 2021, Whitney's net worth officially topped $1.5 billion for the first time. Immediately prior to going public, Whitney owned 20% of Bumble. She was the youngest CEO ever to take a company to an IPO, accomplishing the feat at 31.

Whitney Wolfe Herd was born in Salt Lake City, Utah in 1989. While studying at Southern Methodist University she started selling bamboo tote bags to benefit those affected by the BP oil spill. At 22 years old she joined Hatch Labs and was involved with the creation of an app called Cardify. She then became the vice president of marketing at Tinder and came up with the name of the app.

Whitney left Tinder in 2014 and ended up filing a sexual harassment lawsuit against her former co-workers. She reportedly received more than $1 million plus company stock.

Next Whitney partnered with the founder of Badoo Andrey Andreev to create dating app that eventually evolved into Bumble. Unlike other dating apps, women have vastly more control on Bumble. In 2014 she was named as one of Business Insider's 30 Most Important Women Under 30 in Tech and to the 2017 Forbes 30 Under 30. 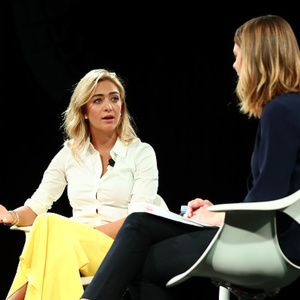