Tom Ricketts net worth: Tom Ricketts is an American businessman who has a net worth of $900 million. Tom Ricketts was born in Omaha, Nebraska in May 1963. He is best known for being the owner of the Major League Baseball team the Chicago Cubs. Ricketts is also the chief executive officer and chairman of Chicago investment bank Incapital LLC and director of TD Ameritrade Holding Corporation, which was founded by his father J.

Joseph Ricketts. Tom Ricketts won a bid to buy the Cubs in 2009. He represented a consortium of family members who chipped in to make a winning offer of $850 million. Today the Cubs are worth $2.6 billion.  He earned his A.B. from the University of Chicago and his M.B.A. from the same university. His brother Peter Ricketts is the 40th and current governor of Nebraska and the former chief operating officer of Ameritrade. Tom Ricketts has made it public that he supports Donald Trump for President. 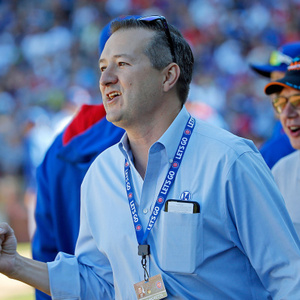