Ted Sarandos net worth and salary: Ted Sarandos is an American businessman who has a net worth of $250 million. Ted Sarandos was born in Phoenix, Arizona in July 1964. He is best known for being the chief content officer of Netflix. He is responsible for overseeing the company's annual budget of more than $6 billion. In 2016 alone Netflix earned 54 Primetime Emmy Award nominations. He quit college to become a manager at a video store and went on to become Western Regional Director of Sales and Operations for East Texas Distributors. Sarandos joined Netflix in 2000. He has received many honors including being named to the Time 100 in 2013. He has served on many boards and was the Executive Committee Appointee for the Academy of Television Arts & Sciences in 2015. He married Nicole Avant in 2009 who became United States Ambassador to the Bahamas the same year. Nicole's father Clarence Avant is an extremely successful music entrepreneur and producer. Ted Sarandos is listed as producer for several films and won a News & Documentary Emmy Award in 2010 for Outrage. In July 2018 Ted and his wife spent $34 million to acquire a mansion in Montecito, California from talk show host Ellen Degeneres. In 2013 the bought a Malibu beach house from David Spade for $10.2 million. They also own a mansion in Hancock Park, California which they purchased for $16 million from the divorcing Melanie Griffith and Antonio Banderas. In total they own more than $60 million worth of real estate that we know about.

Ted Sarandos salary and stock holdings: In 2016 Ted earned $18 million in total compensation. In 2017 he earned $22.4 million, which included a $9 million bonus and $12 million in stock grants. His base salary is $1 million per year. Ted Sarandos is one of the three largest individual shareholders of Netflix stock. As of August 2018 Ted owns 497,699 shares of the company. When Netflix stock hit $411 in June 2018, his shares were worth $205 million before taxes. 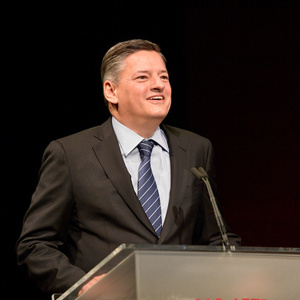