What is Steve Bannon's Net Worth?

Steve Bannon is an American media executive and political consultant who has a net worth of $20 million. Steve Bannon is best known for serving as the chief strategist to Donald Trump during the first seven months of Trump's Presidential term. Previously, he was executive chairman of the far-right website Breitbart, and served on the board of the now-defunct data analytics firm Cambridge Analytica.

In 2020, Bannon was arrested and charged with conspiracy to commit mail fraud and money laundering, and the next year, was held in contempt of Congress for defying a subpoena investigating the January 6, 2021 attack on the US Capitol.

Bannon has financed and produced several films including "The Undefeated," "Fire from the Heartland: The Awakening of the Conservative Woman," and "Occupy Unmasked." Bannon served as acting director of Biosphere 2 before he moved to Hollywood and executive produced Anthony Hopkin's 1999 movie "Titus."

Perhaps most interestingly, in 1993 Bannon negotiated a deal to acquire an estimated 1% of the syndication profits of the TV show "Seinfeld." In 1995 Seinfeld was sold into syndication for the first time. Over the next two decades+, Bannon's 1% equity stake would generate around $33 million in dividends.

On August 20, 2020, Steve Bannon was arrested on a 150-foot yacht off the coast of Connecticut by US Postal Inspectors. Bannon's arrest was connected to a charity called "We Build the Wall". Banon and several alleged co-conspirators were arrested for allegedly siphoning money from the charity to use on personal expenses and purchases. The yacht Bannon was arrested on is owned by a Chinese billionaire named Guo Wengui who is one of China's most-wanted fugitives. Coincidentally, in the same week of his arrest, several banks froze accounts connected to fundraising efforts by a company called GTV Media Group. Bannon and Wengui are allegedly the two key executives behind GTV which raised $300 million in a private offering in spring 2020. 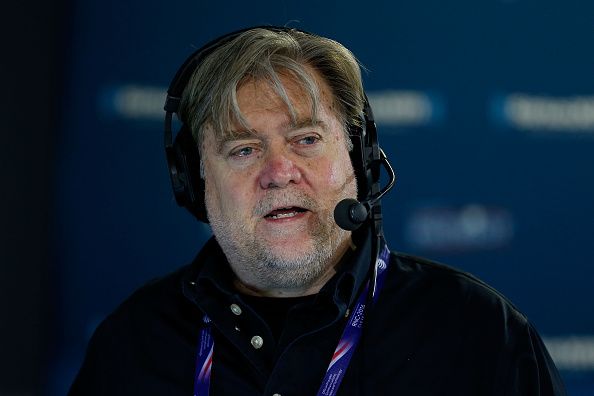 Stephen Bannon was born on November 27, 1953 in Norfolk, Virginia to homemaker Doris and telephone lineman Martin. He is of Irish and partial German descent. As a youth, Bannon went to Benedictine College Preparatory, a Catholic military school in Richmond. Subsequently, he attended Virginia Tech, and during the summers, worked at a local junk yard. After graduating from Virginia Tech with a degree in urban planning, he became an officer in the US Navy for seven years. During this time, he obtained a master's degree in national security studies from Georgetown University and an MBA from Harvard Business School.

Following his service in the Navy, Bannon worked as an investment banker at Goldman Sachs in the Mergers and Acquisitions Department. In 1987, he moved to Los Angeles to assist the company in expanding its presence in the entertainment industry. Three years later, Bannon and some of his colleagues formed their own company, a boutique investment bank called Bannon & Co. While still managing the company, he became director of the earth science research project Biosphere 2, which operated in Oracle, Arizona.

Immersed in the media world by the early 90s, Bannon became an executive producer of many Hollywood films, including "The Indian Runner" and "Titus." Later, in 2002, he partnered with entertainment industry executive Jeff Kwatinetz at the management company The Firm, Inc. Following this, he made a Ronald Reagan documentary entitled "In the Face of Evil"; this project subsequently led him to conservative journalist and publisher Andrew Breitbart, who compared Bannon to Nazi filmmaker Leni Riefenstahl. Bannon went on to finance and produce such deranged, far-right projects as "The Undefeated" and "Occupy Unmasked." From 2007 to 2011, he was the CEO and chair of Affinity Media. Additionally, he served as vice president of the board of Cambridge Analytica, which used illegal data analytic tactics to target American voters during the 2016 presidential election.

Among his most notorious media endeavors, Bannon was a founding member of Breitbart News, an extreme rightwing website that publishes virulently racist, xenophobic, antisemitic, and sexist material. He became executive chair of the website's parent company in 2012, and briefly returned in 2017 following his brief employment at the White House. In 2018, Bannon was ousted from Breitbart. He subsequently formed Citizens of the American Republic, a dark money organization.

In August of 2016, Bannon was appointed chief executive of Donald Trump's presidential campaign. Following the latter's election, he became his chief strategist and senior counselor. Along with Stephen Miller, Bannon was central to the creation of the racist executive order that restricted US travel and immigration from several Muslim-majority countries. He was ultimately removed from his role in April of 2017, and he officially left the White House in August.

Following his departure from the White House, Bannon toured Europe to speak at various far-right political events, with the aim of building a global network of fascist parties. Later, in August of 2020, New York federal prosecutors charged Bannon and three other men with defrauding donors in a major crowdfunding campaign that claimed to be raising money for building a wall along the US-Mexico border. Pleading not guilty, Bannon was pardoned by Trump before the date of his trial.

After posting death threats against infectious disease expert Anthony Fauci on social media in November of 2020, Bannon was permanently banned from Twitter, just like his former boss Donald Trump.

In September of 2021, Bannon received a subpoena from the US House Select Committee on the January 6 Attack, ordering him to appear on October 14. When he did not comply, the House of Representatives voted to hold him in criminal contempt of Congress. He was subsequently referred to the Justice Department for a potential prosecution.

Bannon opposes immigration, denies climate change, and supports populist authoritarian movements in the US and in countries throughout Europe.

In his personal life, Bannon has been married and divorced multiple times. His first marriage was  to Cathleen Suzanne Houff, with whom he had a daughter named Maureen. Following their divorce, Bannon wed former investment banker Mary Louise Piccard in 1995. The pair had twin daughters, and split in 1997. During their marriage, Bannon was charged with misdemeanor domestic violence, battery, and dissuading a witness. Later, in 2006, he married Diane Clohesy; they divorced in 2009.