How much is Stephen Elop Worth?

Stephen Elop Net Worth: Stephen Elop is a Canadian manager who has a net worth of $40 million. Born on December 31, 1963, in Ontario Canada, Stephen Elop is the former CEO of Nokia Corporation. As of 3 September 2013, when it was officially announced that Microsoft had agreed to give $7.2bn for the acquisition of Nokia's mobile phone and devices business, it was also revealed that Elop will step aside as President and CEO of Nokia Corporation in order to take on the position of Executive Vice President at Microsoft. Until his transfer to Microsoft, he is also said to resign from Nokia's Board of Directors, temporary serving as Executive Vice President, Devices & Services. It was in 2001 that Elop filled in the shoes of Olli-Pekka Kallasvuo, becoming the first Canadian and first non-Finn to be named CEO of Finnish mobile phone supplier Nokia. Prior to joining the company that was a dominating force during the cell phone boom hit in the 1990s, he had the chance to work at various companies including Microsoft, Juniper Networks and Boston Chicken. As for his career start, Elop first served as consultant for Lotus Development Corporation. Having taken a BA in computer engineering and management from the McMaster University in Hamilton, he also played a key role in creating one of the first Internet networks in Canada. That his passionate commitment to advancing the mobile industry has grown bigger and bigger ever since, can be clearly seen in Stephen Elop's speeches. Aside from building up his resume, he is married to Nancy Elop, with whom he has five children. When he is not working or spending time with his family, Elop is up in the sky since he is an avid recreational pilot too. 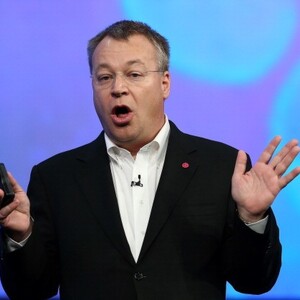