Sean Quinn net worth: Sean Quinn is an Irish businessman who has a net worth of $100 thousand. Sean Quinn was born in Derrylin, County Fermanagh, Northern Ireland in December 1947. He was listed as the richest person in the Republic of Ireland in 2008 but he filed bankruptcy in 2011. Quinn led the Quinn Group which at some point was estimated to be worth between four and five billion Euros with a pre-tax profit of 439 Euros in 2007. In 2012 Sean Quinn was sentenced at the High Court in Dublin to nine weeks in jail for continued asset stripping as well as non-co-operation with the Irish Bank Resolution Corporation. Quinn arranged a payment of 500 thousand Euros to the general director of Quinn Properties Ukraine right before he lost control of the company. His net worth took a big hit from 2008 to 2009 during the recession. He lives a very private life but is married and has five children who all work in the family business.

Loss of Fortune: In 2008, Sean Quinn was the richest person in Ireland, with a net worth of about $6 billion. Just three years later, he filed for bankruptcy. Quinn was the owner of the Quinn Group, which owned a bank worth about $5 billion in 2005. In 2008, the global financial crisis caused the Quinn Group to take a huge hit. The Anglo Irish bank, part of the Quinn Group, represented about half of Quinn's wealth. During the recession the bank nearly collapsed, slashing Quinn's net worth drastically.  Then in 2008, Quinn Insurance was fined $3.2 million by the Irish government. Multiple court cases further reduced his massive fortune until finally, on January 12, 2012, the Republic of Ireland declared Sean Quinn bankrupt. In November 2012, he was jailed for three months for contempt of court, having allegedly engaged in asset stripping  by arranging a payment of $500,000 to the general director of Quinn Properties Ukraine, just before losing control of the company. Sean Quinn went from being worth $6 billion to $0 in just four years. 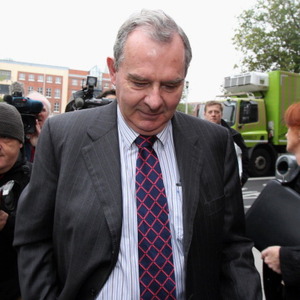