Bonnie Disick, Scott Disick's mother, passed away after a long illness in October of 2013 at the age of 63. Her decline and death were chronicled on Keeping Up with the Kardashians in February of 2014. Jeffrey Disick, his father, passed away unexpectedly only a few months after his mother in January of 2014, also at the age of 63.  Scott referenced his father's illness during an episode of Keeping Up with the Kardashians prior to his passing, while visiting a cancer-stricken fan in an episode of the show. He did not go into details regarding what the illness was, but the emotion on his face was unmistakable. The deaths reportedly hit him quite hard, and there has been much discussion about whether he is returning to his old hard-partying ways. Kourtney Kardashian has reportedly been trying to push him towards rehab and counseling. Disick officially dated Kardashian from 2006 to 2015 and broke up after a rocky relationship. The couple met at a house party thrown by Joe Francis of Girls Gone Wild fame. Their first son Mason Dash Disick was born in 2009. Their first daughter Penelope Scotland Disick was born in 2012 and their second son Reign Aston Disick was born in 2014. Scott Disick also appeared in the reality TV series I Am Cait from 2015 to 2016 and Rob & Chyna in 2016. In 2015 he had a recurring role in the series Youthful Daze. 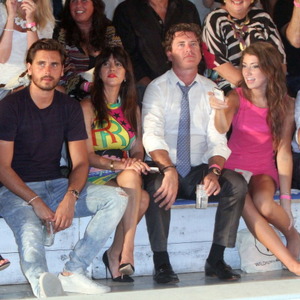