Ross Brawn net worth and salary: Ross Brawn is an English former motorsport engineer who has a net worth of $150 million dollars. Born in Ashton-under-Lyne, Lancashire on November 23, 1954, Brawn is best known for working as technical director of the Bennetton and Ferrari Formula One teams. He owned the Brawn GP team.

who acquired Honda in 2009 and were bought into by Mercedes later that year. Brawn stepped down from director and team principal in 2013 and retired from Formula One in 2014. He took an interest in motorsports and engineering after visiting Belle Vue Stadium at an early age. He became a Mechanical Craft Apprentice in 1971 for the United Kingdom Atomic Energy Authority. He received an honorary doctorate in Engineering from Brunell University for his motorsport efforts and received a second honorary doctorate in 2011 from Heriot-Watt University.  He began work in motorsports in 1976 after joining March Engineering as a milling machine operator in Bicester. He became a mechanic for Formula 3 racing and worked as an aerodynamicist in the team's wind tunnel. In 1989, Brawn became part of the Jaguar Sportscar racing division and was a lead designer on the Jaguar XJR-14, which won the 1991 World Sportscar Championship. He currently owns a vacation home in Cornwall near Trevose Head. He is married to  Jean Brawn and is a keen salmon and trout fisherman. 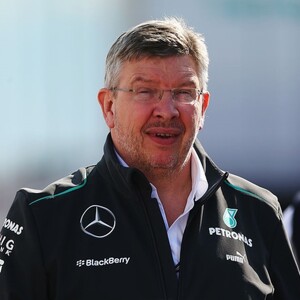