Ron Shirley net worth: Ron Shirley is an American entrepreneur and reality television personality who has a net worth of $4.5 million dollars. Based in Lizard Lick, North Carolina, Ron Shirley is the co-owner, with his wife, Ashley, of Lizard Lick Towing and Recovery, a repossession company that was first featured on the truTV show, All Worked Up. Mr. Shirley's company began with only two employees, and has since grown to employ 15 people, who drive a fleet of twenty trucks. The segments about Lizard Lick Towing on All Worked Up, proved to be the most popular. truTV subsequently approached the Shirleys about appearing on their own spin-off show, featuring their daily repo-runs, and their employees . The spin-off show, Lizard Lick Towing, premiered on February 7, 2011, and is now in its sixth season. The Shirleys are vocal about their religious beliefs and incorporate their faith into their show and their merchandise. Through his job, Shirley runs the Eastern Chapter of Dirt Church, and uses his show as a platform to share his faith with children who are victims of sexual abuse and drug addicts. He also has held annual barbecues in the past to help some of the people who have had their property repossessed by Lizard Lick Towing. Ron and his wife, Ashley, live in Lizard Lick, North Carolina with their four children Alexa, Alex, Gabe and Maggie Mae. 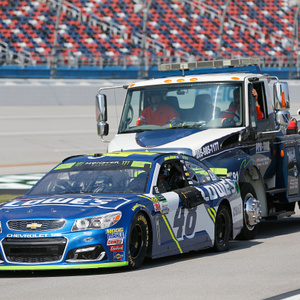