Rich Wakile net worth: Rich Wakile is an Lebanese-American businessman and reality star who has a net worth of $5 million. Rich Wakile is most famous for his appearances alongside wife Kathy Wakile on Bravo's hit show The Real Housewives of New Jersey.

Kathy and Rich have been married for over 20 years and raised their children,Victoria and Joe, in Wayne, New Jersey. Rich made a lot of his money by owning several businesses, including a chain of gas stations. Kathy was one of the main cast members of the Real Housewives for several seasons, and later made cameo appearances on the show. Kathy is the cousin of Teresa Giudice and Joe Gorga, and Rich has been known to rub Teresa the wrong way with his jokes and opinions.  In addition to her work in reality television, she started her own line of deserts called "Dolci della Dea" which translates to "Goddess Sweats". She is also working on a line of jewelry called "Goddess Eye". Both Rich and Kathy are big supporters of the National Brain Tumor Society, following the tumors their daughter Victoria experienced through her childhood, and they donate a portion of their business proceeds to the cause every year. 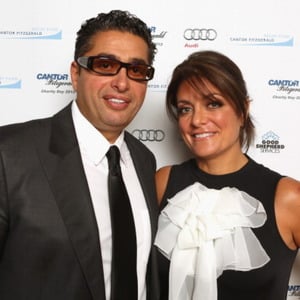