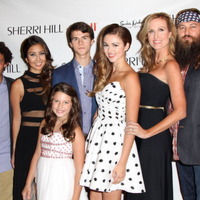 Rebecca Robertson net worth: Rebecca Robertson is a Taiwanese-American reality television personality and aspiring fashion designer who has a net worth of $100 thousand dollars. Rebecca Robertson was born in Taiwan and came to be a part of the Robertson family of "Duck Dynasty" fame after she lived with them as an exchange student and then became their foster child. The Robertsons later adopted Rebecca, making her the eldest of Willie and Korie's five children and one of their two adopted children. The Robertsons have three biological children. "Duck Dynasty" is the very popular A&E reality series about the Robertson family and their lives after the success of their Duck Commander duck call. 24 year old Rebecca Robertson has rarely appeared on the reality series that follows her family, as she has been in Los Angeles interning in the fashion industry for the last two years. She joined the cast of the show in Season 5, and is now working with her mother Korie Robertson to launch the company's fashion arm. Drawing on her background in the Los Angeles fashion industry, Rebecca co-edits the family's fashion blog, "Duck & Dressing", and is helping to prepare for the launch of their online store in 2014.