Paul DePodesta net worth and salary: Paul DePodesta is an American businessman who has a net worth of $9 million and an annual salary of $2 million. Paul DePodesta is formerly the the Vice President of player development and scouting for the New York Mets, the former Front Office assistant for the San Diego Padres, Cleveland Indians, and Oakland Athletics. He was born on December 16, 1972 in Alexandria, Virginia. He was educated at Harvard University, where he played baseball and  football. He graduated in 1995 with a degree in economics. DePodesta was the general manager of the Dodgers from February 16, 2004 to October 29, 2007. He led the Dodgers to their first playoff win in 16 years. He also worked with the Baltimore Stallions who were part of the Canadian Football League. DePodesta was featured in the 2011 movie Moneyball: The Art of Winning an Unfair Game. He is married and has three sons and a daughter. He has also been a speaker at several business conventions and he has been included in publications including Baseball Prospectus as well as Fortune Magazine, and they named him as one of the Top 20 innovators who are under the age of 40. 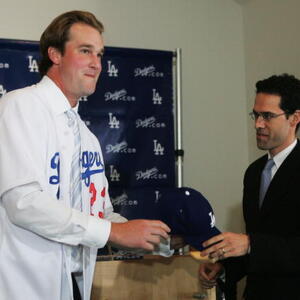