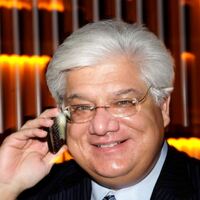 Mike Lazaridis net worth: Mike Lazaridis is a Greek Canadian businessman and entrepreneur who has a net worth of $600 million. He is best known for founding BlackBerry.

Mike Lazaridis was born in Istanbul, Turkey in March 1961. He is the founder and managing partner of Quantum Valley Investments and the founder of BlackBerry Limited. He has been the Co-Chairman and Co-CEO of BlackBerry from 1984 to 2012 and the Chair of the Innovation Committee from 2012 to 2013. He co-founded Quan Valley Investments in 2013 with BlackBerry co-founder Douglas Fregin. Lazaridis founded Perimeter Institute for Theoretical Physics in 1999 and serves as Board Chair. Mike Lazaridis founded the Institute for Quantum Computing in 2002. He is an Officer of the Order of Canada. He has also received an Academy Award and an Emmy Award for his technical achievements. BlackBerry created and developed the BlackBerry brand of smartphones and tablets. The company had a revenue of $916 million in 2019. At its peak in 2011, the company generated more than $20 billion in revenue.