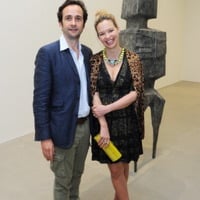 Matt Hermer net worth: Matt Hermer is a British entrepreneur and reality television personality who has a net worth of $20 million dollars. Matt Hermer was born in England and graduated from the University of Reading. He began his professional career in the finance industry, but ten years later, he shifted his focus and purchased his first bar. In the late 90s, he launched the Ignite Group, which includes a series of cocktail bars, the ultra-exclusive nightclub, Boujis, and the Bumpkins restaurant chain. He has since expanded his restaurants and clubs to Spain and Hong Kong. Tatler named him "Restaurateur of the Year" in 2008, and he has appeared on multiple London socialite lists. He is married to Marissa Hermer and they have two children. She is a cast member of the Bravo reality series, "Ladies of London". The show follows a group of successful women living with their families in London.