What is Massimo Agostinelli's net worth?

Massimo Agostinelli is an Italian American contemporary artist and entrepreneur who has a net worth of $33 million.

Massimo Agostinelli was born in London, England on September 25, 1987. He grew up in Manhattan, New York and lives in Zurich Switzerland. His father is American Italian billionaire financier Robert Agostinelli and his mother is Parisian Greek sculptress Pascale Gallais. Massimo reportedly attended 13+ schools and later graduated from Webster University.

In 2014 Agostinelli's London solo show sold out on the opening night. In 2015 Agostinelli's New York solo show was hosted by 2x Grammy winner Maxwell. His work has been exhibited at Zeitz MOCCA Cape Town, Museo Tamayo Mexico City and the Saatchi Gallery London.

Agostinelli is known for his work with interventions at art fairs around the world such as Art Basel and Frieze. His collectors include Leonardo DiCaprio, Elizabeth Hurley, Jon Voight, and Bernie Ecclestone.

Agostinelli and his brother Giovanni (Gio) are also joint partners of T1P.com / "Think 1st Principles". He married to Argentinian South African Luciana Agostinelli, they have 2 children. His sister is Heloise Agostinelli. The artist's pseudonym is XX. 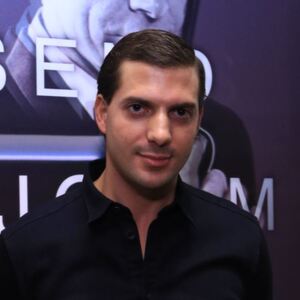