What Is Mark Davis' Net Worth and Salary?

Mark Davis is an American professional sports owner and businessman who has a net worth of $750 million. Mark is the son of Al Davis, and he inherited the Oakland Raiders (now known as the Las Vegas Raiders) when his father passed away in 2011. Davis is now the principal owner and managing partner of the Raiders, and he also owns the WNBA team the Las Vegas Aces. Mark and his mother Carol own a 47% share of the Raiders, which gives them controlling interest according to a contract, and Davis oversees the day-to-day control of the team.

Mark Davis was born Mark M Davis on May 18, 1955, in Brooklyn, New York. Many of Clark's bios previously said that he was born in Charleston, South Carolina, while his father, Al, was working at The Citadel as an assistant football coach, but in 2020, he set the record straight in the Charleston newspaper "The Post and Courier," stating, "My mom decided to go back up to Brooklyn, where her parents lived, to have me. I was born in Brooklyn and then we came back down to Charleston." Mark graduated from California State University, Chico, and before inheriting the Raiders from his father, he was involved in developing Raider Image stores. Davis also worked in the team's equipment department, and in 1986, he developed muff-style hand warmers to be used for football. In 1980, he represented Cliff Branch, a member of the Raiders, in contract negotiations, and got Branch an annuity that lasted until his death. Al subsequently kicked Mark out of his house, and after the Raiders moved to Los Angeles, Davis lived with Branch.

After Davis and his mother inherited the Oakland Raiders, Mark took over Al's job of managing general partner. He is the operating head of the Raiders, and he is in charge of the team's day-to-day operations. Mark also represents the team at owners' meetings. Since the team's lease with the Oakland Coliseum was nearing its end and the venue had several issues because of its age, Davis began looking for a place to build a new stadium for the Raiders. Though he initially wanted to keep the team in Oakland, in February 2015, he announced that they were teaming up with the San Diego Chargers and their owner, Dean Spanos, to pursue a shared stadium in the city of Carson, California, which is located in Los Angeles County. Their proposal competed with and lost out to a proposal from Stan Kroenke, the owner of the Los Angeles Rams. Davis later pursued a stadium in Las Vegas with Las Vegas Sands Corporation founder, chairman, and CEO Sheldon Adelson, but after the funding came through, he went ahead with the deal without the involvement of Adelson. In March 2017, the NFL approved the Raiders' move to Las Vegas. In January 2021, Mark purchased the WNBA team the Las Vegas Aces from MGM Resorts International, and the deal was approved by the NBA and WNBA the following month. Before he became the team's owner, Davis had been a season ticket holder. In May 2021, he hired Becky Hammon to be the head coach of the Aces, and she became the league's highest-paid coach. 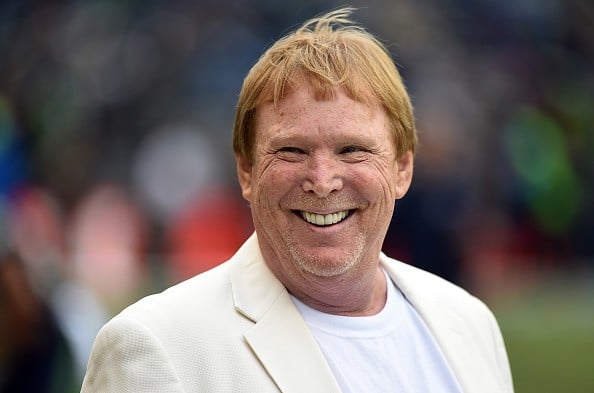 Mark considers himself a food connoisseur, and he has said that Joe's Stone Crab (Miami Beach), Dan Tana's (Los Angeles), and P.F. Chang's are some of his favorite restaurants. A 2014 article in "ESPN The Magazine" stated that Davis drives a "white 1997 Dodge Caravan SE outfitted with a bubble-top Mark III conversion kit, a VHS player mounted to the roof inside and a r8hers personalized plate." The article also mentioned that Mark is a "lifelong bachelor" and that he had given up alcohol 15 years earlier, and Davis quipped, "I'll go back to drinking if we win the Super Bowl or I get married. The first one will be because I'll want to, the second because I'll have to."

After Ray McDonald of the San Francisco 49ers was arrested for domestic violence in August 2014, Mark spoke out about the issue, saying that "if somebody's accused or arrested in a domestic violence case, they should be suspended with pay" while an investigation is underway. On the subject of NFL players kneeling during the National Anthem to protest police brutality toward African-Americans, Davis originally preferred that players abstain from protesting while wearing their Raiders uniforms, but he changed his mind after Donald Trump called players who protested "Sons of Bitches" and called for their firing. In a public statement, Mark said, "I can no longer ask our team not to say something while they are in a Raider uniform. The only thing I can ask them to do is do it with class. Do it with pride. Not only do we have to tell people there is something wrong, we have to come up with answers. That's the challenge that's in front of us as Americans and as human beings." In May 2018, he declined to take part in an NFL owner resolution about the protests that said players would be required to stay in the locker room during the anthem if they don't want to stand for the anthem and that the team would be fined if any players kneeled or raised their fists. In April 2022, Davis said he would welcome Colin Kaepernick to the Raiders "with open arms."

In September 2021, it was reported that Davis was building a "Nevada mega-mansion that mimics the angular lines defining his team's practice facility, headquarters and Allegiant Stadium." Mark paid $6 million for the 6.32-acre lot in August 2020, and the 15,046 square foot home is located in a private luxury community called Ascaya. A city permit states that the mansion will include five bedrooms and ten bathrooms and will be valued at $14 million. 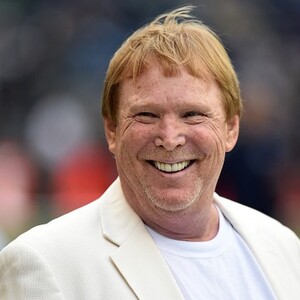