Laura Dotson net worth: Laura Dotson is an American auctioneer and reality television personality who has a net worth of $4.5 million dollars. Laura Dotson was born in East Los Angeles, California and grew up in Thousand Oaks, Los Angeles. She began working as auctioneer with her husband, Don Dotson in the mid-90s.

Danny Dotson grew up in an auctioneering family. Laura and Danny Dotson's company, American Auctioneers, has grown from 300 auctions per year to 3000. She is known for her end of auction catchphrase – "Don't Forget to Pay the Lady!". She is featured on the A&E reality series, "Storage Wars", which follows a group of men and women who buy up the contents of storage units that are being auctioned off because of back rent. The men and women only have five minutes to review the lockers before the auction begins and they must start bidding. The hope is that something within the lockers will actually be valuable. The show is currently in its 5th season and has spawned two spin-offs. In 2015, Dan and Laura Dotson acquired StorageAuctions.net. StorageAuctions.net is the only website that offers free sign up, free searches, no sellers fees, and no membership fees online. They also offer a live online self storage auction directory and auction system. 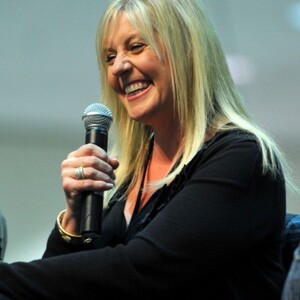