Kody Brown Net Worth: Kody Brown is an American reality television star and polygamist who has a net worth of $800,000. Brown is most famous for appearing in the series "Sister Wives," which focuses on Brown's polygamous family. He was also the subject of a prominent legal case in which the United States challenged the State of Utah's criminal polygamy law. Kody has claimed that he is only legally married to one of his 4 wives, while the other three are "spiritual unions."

Early Life: Kody Winn Brown was born on January 17th of 1969. Kody was born into a polygamous family, as his father became a polygamist and took three wives. Kody was raised alongside three siblings, although he does not know which ones came from which of his father's three wives. Raised in a Mormon household, he later admitted that he and his family struggled with the Mormon faith while he was growing up.

Sister Wives: Kody began appearing in TLC's "Sister Wives" when it debuted in 2010. The show follows his family's life, including all their minor arguments and interesting divisions of labor in this unique system. Initially, Kody Brown wanted to star in "Sister Wives" to bring awareness to polygamy in the United States, in the hopes that it would become more accepted in the mainstream.

Legal Issues: Although Kody hoped to paint polygamy in a positive light with "Sister Wives," this plan somewhat backfired when he was the subject of legal action. The US federal courts challenged the state of Utah's polygamy law, and footage from "Sister Wives" was essentially used as evidence against Kody Brown.

The day after the first episode of "Sister Wives" was aired, police in Utah announced that they were investigating Kody Brown for bigamy, a felony charge that comes with a maximum prison sentence of 20 years. In addition, each of his wives also faced a possible 5-year prison sentence.

Kody Brown assumed that because he was only legally married to one of his wives, he would be safe from criminal charges. However, Utah state law often defines marriage as cohabitation. Because Kody Brown had lived with his four wives as a "family unit" for a period of 16 years, some observers argued that he was actually in a common-law marriage with all four women simultaneously.

Although the case was eventually taken to the district courts, it was dropped. A judge ruled that the definition of marriage as cohabitation was unconstitutional. The state of Utah then took up the matter with the US Court of Appeals for the Tenth Circuit, although the case was dismissed. In the end, it was determined that polygamy prosecutions should be limited to cases in which alleged child bigamy, fraud, and abuse/violence were taking place.

Relationships: Kody Brown is married to Meri, Janelle, Christine, and Robyn, all of whom have taken his surname. That being said, the only marriage that holds any legal weight is his marriage to Robyn. He legally divorced his first wife Meri, but only so that he could legally adopt Robyn's three children from her previous marriage. Because of this, Kody Brown has a total of 18 children – 15 of which are biologically related to him. 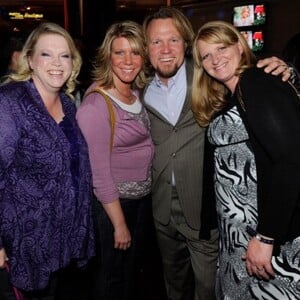