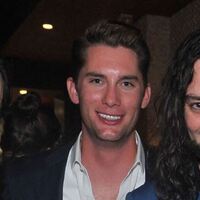 Kalon McMahon net worth: Kalon McMahon is an American businessman who has a net worth of $3 million dollars. Born in Houston, Texas, Kalon McMahon is a luxury brand consultant from a very successful family. He appeared on the eight season of "The Bachelorette", and was famously evicted from the show after the fifth episode for referring to "Bachelorette" Emily Maynard's children as, "baggage". He recently appeared on the post-"Bachelorette" special, "Men Tell All", where the audience booed him repeatedly. His attempt to apologize to Ms. Maynard was soundly rejected. He is currently appearing on the spin-off series, "Bachelor Pad 3", and is reportedly already in the early stages of a romantic relationship with former "The Bachelor" contestant, Lindzi Cox, who he met while taping the show. He reportedly feels that he got a bum deal on "The Bachelorette", but has said that "Bachelor Pad" was a much more positive experience, and that he feels like he made some great friends during taping.