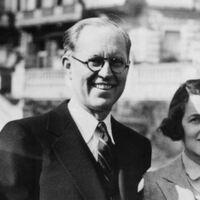 Joseph Kennedy net worth: Joseph Kennedy was an American businessman, politician, and investor who had a net worth of $400 million at the time of his death in 1969. That's the same as roughly $2.6 billion today after adjusting for inflation. In 1957, Fortune Magazine estimated Kennedy's net worth at $200 – $400 million which made him one of the 15 richest people in the country. After graduating from Harvard in 1912, Kennedy went to work for the Columbia Trust Bank. When the bank was facing a financial crisis, Joseph borrowed $45,000 from friends and family (roughly $1.1 million today) to buy a controlling interest in the bank. He quickly proved himself to be a talented entrepreneur. Kennedy became a millionaire for the first time thanks to the 1920s bull market. He then took many short positions in 1929 right before the market crashed. He would later claim that he knew it was time to get out of the highly-hyped stock market when he started receiving tips from his shoe-shine boy. During the depression Kennedy bought vast amounts of real estate at extremely low prices. In 1929, his net worth was estimated at $4 million (roughly $60 million today). Within six years his net worth was believed to be around $180 million (roughly $3 billion today). In his later career, Kennedy made huge profits investing in Hollywood film studios.

A widely believed legend is that Kennedy made his fortune bootlegging. There is very little evidence that this is actually true. He did have large investments in the legal liquor importing and distribution business after prohibition was lifted.

Joseph Kennedy was born in Boston, Massachusetts in September 1888 and passed away in November 1969. He was married to Rose Kennedy and was the father of President John F. Kennedy, Senator and Attorney General Robert F. Kennedy, and Senator Ted Kennedy. Joseph Kennedy graduated form Harvard University and was a Democrat. From 1934 to 1935 he served as the 1st Chairman of the Securities and Exchange Commission. Kennedy was also the 1st Chairman of the Maritime Commission from 1936 to 1938. From 1938 to 1940 he served as the 44th United States Ambassador to the United Kingdom. Kennedy served as a leader for the Irish Catholic community and worked at a shipyard. His company Somerset Importers after Prohibition ended in 1933. He suffered a stroke in 1961 and developed aphasia and lost his ability to speak. Joseph Kennedy passed away on November 18, 1969 at 81 years old.