Joan Dangerfield net worth: Joan Dangerfield is a global businessman and entrepreneur who has a net worth of $10 million. She is the widow of comedian Rodney Dangerfield and is the managing partner and co-founder of The Opus 73 Group, a consulting firm that provides investment promotion services to the Chinese government.

Prior to starting The Opus 73 Group, she spent 20 years running an international floral distribution company called, Jungle Roses, which was a recipient of the United Nations' "Business of the Future" award. She met her late husband, Rodney Dangerfield, when he walked into her Santa Monica flower shop; it was basically love at first sight. The couple married in 1993 and remained married until 2004 when Dangerfield passed away from complications with a surgery. While the couple was just starting out in 1995, Joan developed a website for Rodney earning him the distinction of being the first celebrity to have his own official site. After Rodney passed away in 2004, Joan produced a 2-hour documentary about Rodney's life for A&E. She also serves as the President and CEO of Xis International, Dangerfield Entertainment, and Paper Clip Productions. She currently resides in Beverly Hills, California and continues to work for Opus 73, which specializes in Hollywood entertainment and media companies and has expertise in investment promotion, attraction and retention. 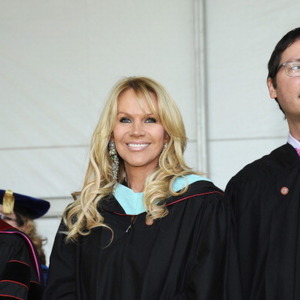