Jase Robertson Net Worth: Jase Robertson is an American business executive, professional duck hunter, and reality television star who has a net worth of $8 million. Robertson is best known for starring on the reality television series "Duck Dynasty," which aired on A&E from 2012 to 2017. Jase appeared in 129 episodes over 11 seasons, and the show was one of the most popular programs on television during its run, often attracting more than eight million viewers per episode. Robertson has also appeared on the shows "Duck Commander" (2009–2011), "Larry King Now" (2013), "Live with Kelly and Ryan" (2013), "Late Night with Jimmy Fallon" (2013), "The Doctors" (2015), and "The Outdoor Experience" (2017), and he published the book "Good Call: Reflections on Faith, Family, and Fowl" in 2014.

Early Life: Jase Robertson was born Jason Silas Robertson on August 16, 1969, in Bernice, Louisiana. Jase grew up with mother Marsha (better known as Kay), father Phil, and brothers Willie, Jeptha, and Alan, and in 2020, he found out that he has a half-sister, Phyllis, from.an affair Phil had in the 1970s. During his youth, Jase enjoyed going on hunting trips with his father and wanted to spend as much time in the woods as possible, which resulted in him missing the maximum amount of school days allowed. When he did go to class, he attended West Monroe High School.

Career: Jase's father founded the Duck Commander company, which has grown into a thriving business empire after spending more than 25 years creating popular duck calls carved out of cedar. Robertson's brother Willie, armed with a degree in business, turned Phil's handcrafted hobby into a multi-million-dollar business that sells over 600,000 duck calls a year in addition to merchandise, DVDs, memorabilia books, and more. Jase is in charge of manufacturing the duck calls, the most popular of which is still the original "Duck Commander." He hand tunes all of the calls and invented one called the "Triple Threat" that uses three reeds instead of the two that most duck calls utilize. Robertson previously served as the company's COO, but on a 2019 episode of the podcast "Unashamed With Phil Robertson," he revealed that he had started working on Wall Street.

"Duck Dynasty" premiered on March 21, 2012, and during its first season, the show averaged 1.82 million viewers per episode. The series starred Jase, Phil, Willie, Alan, Jep, and Phil's brother, Si, and other members of the Robertson family often made appearances. The third season of "Duck Dynasty" averaged more 8.32 million viewers per episode, and season four was even more successful with an average of 9.16 viewers per episode. In 2013, the family released the album "Duck the Halls: A Robertson Family Christmas," and Jase performed the tracks "Hairy Christmas" and "Baby, It's Cold Outside" and is credited as a writer on "Duck the Halls." The album was a hit, reaching #3 on the "Billboard" 200 chart and #1 on the Top Holiday Albums and Top Country Albums charts. That year, Robertson was nominated for a Teen Choice Award for Choice TV: Male Reality/Variety Star, along with Phil, Willie, and Si. The final episode of "Duck Dynasty" aired on March 29, 2017, and since the show's debut, "Duck Dynasty" merchandise brought in more than $400 million.

Personal Life: Jase has been married to his wife, Missy Robertson, since August 10, 1990, and they have a daughter, Mia (born September 12, 2003) and two sons, Reed (born May 15, 1995) and Cole (born December 4, 1997). Mia was born with a bilateral cleft lip and palate and had to undergo surgery eight times by the age of 12. In 2014, the Robertsons founded the Mia Moo Fund, a charitable organization "dedicated to raising awareness and funds towards treatments of cleft lip & palate." In 2017, Robertson promised to shave off his beard if a fundraiser for the Mia Moo Fund raised $100,000, and though only $35,000 was raised, he got rid of his beard anyway. 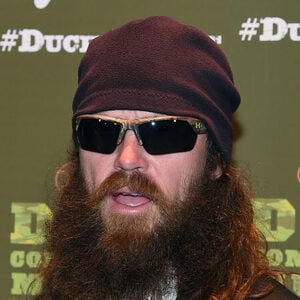