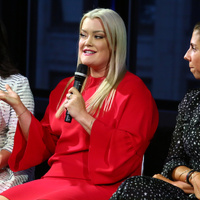 Jamie Kern Lima net worth: Jamie Kern Lima is an American entrepreneur and journalist who has a net worth of $450 million. Jamie Kern Lima was born in San Rafael, California in July 1977. She co-founded It Cosmetics and serves as the CEO. Lima competed on the first season of the reality television series Big Brother. She appeared on an episode of the TV series Baywatch after winning the Baywatch College Search in 1999. Jamie Kern Lima competed in the Miss USA pageant after winning Miss Washington USA. She earned her MBA from Columbia Business School and worked as field reporter  at KNDU and KPTV. She launched her cosmetics line in 2008 and has appeared on episodes of the TODAY Show, Extra!, E! News, Rachael Ray, and more. In 2008 she won the Redbook Magazine MVP award. She has done live reports from the Vatican City when Pope John Paul II passed away.