James Voss net worth: James Voss is an American retired astronaut who has a net worth of $1.5 million. James Voss was born in Cordova, Alabama in March 1949. He attended Auburn University and wrestled for the school. Voss served as Chapter President for the Beta Zeta Chapter of the Theta Xi Fraternity.

He also participated in Army ROTC at Auburn. James graduated in 1972 with a degree in Aerospace Engineering and was commissioned a Second Lieutenant in the United States Army. In 1974 he graduated from a Master of Science degree in Aerospace Engineering Sciences from the University of Colorado. He served as a platoon leader, intelligence staff officer, and company commander in West Germany with the 48th Infantry Regiment. Voss taught at the United States Military Academy at West Point. He attended the U.S. Naval Test Pilot School and the Armed Forces Staff College and worked for the U.S. Army Aviation Engineering Flight Activity. He was assigned to NASA at the Johnson Space Center from 1984 to 1987. In 1987 Voss was selected as an astronaut candidate. He became a mission specialist on Space Shuttle flights and served as Deputy for Flight Operations in the Space Station Program Mission Integration and Operations Office. He flew in space five times on the Space Shuttle and International Space Shuttle. Voss took part in the longest spacewalk to date, at just under 9 hours. 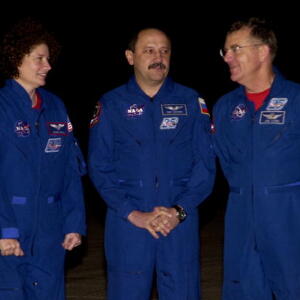