James Chao net worth: James Chao is a Chinese American entrepreneur who has a net worth of $400 million. James Chao earned his fortune as the founder of the Foremost Group which is a shipping, trading, and finance enterprise based in New York. He is the father-in-law of Kentucky Senator Mitch McConnell.

James Si-Cheng Chao was born in Jiading District, Shanghai, China in December 1927. He worked as a sea captain before moving to the United States in 1958. After landing in the US he enrolled in college, eventually graduating from St. John's University, Queens with a master's degree.

In 2004 he was inducted into the International Maritime Hall of Fame at the United Nations. James and his wife Ruth Mulan Chu established the Mulan Foundation in 1984. The foundation provides scholarships to students in both the U.S. and China to help them achieve better access to higher education.

Chao donated $40 million to the Harvard Business School in 2012. The gift was in honor of Ruth who died in 2007. Today the school operates the Ruth Mulan Chu Chao Center. It is the first building at Havard Business School named after an Asian American.

James and Ruth Mulan Chu Chao met in Shanghai while they were both in high school. They both separately relocated to Taiwan. They married in 1951 and eventually had six children. Their oldest daughter Elaine Chao became the first woman of Asian Pacific American descent to be appointed to a president's cabinet. Their daughter Angela Chao serves as CEO of Foremost. His son-in-law, Elaine's husband, is Senator Mitch McConnell. 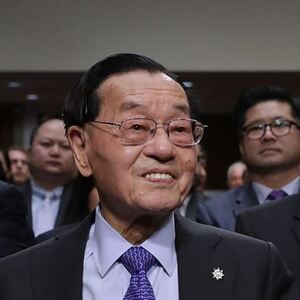