Ivan Savvidis net worth and wealth: Ivan Savvidis is a Greek-Russian businessman and politician who has a net worth of $530 million. Ivan Savvidis was born in Tsalka, Georgia in March 1959. He is one of the wealthiest people in Russia and is a member of parliament who is closely linked to President Vladimir Putin.

Savvidis served in the Soviet Army and studied at the Public University of Economics. He started out in the tobacco industry and served as President of soccer club FC Rostov from 2002 to 2005. He was also the Chairman of FC SKA Rostov-on-Don and became the owner of Greek team PAOK in 2012. Savvidis is the President of the Federation of Greek Communities of Russia and is a member of the United Russia political party. He owns 82% of the Greek tobacco company SEKAP. In 2017 his media company Dimera Media acquired two of Greece's largest newspapers and the television network E Channel. He has been listed as the 30th wealthiest Russian in the world. On March 11, 2017 during a match between POAK and AEK, Savvidis entered the field with his bodyguards to argue with the officials. He entered the field twice. On the second occasion he was no longer wearing an overcoat which made his holstered gun visible. He threatened the referees over a disputed goal at the end of the match. Ivan's team appeared to score a late goal that would have taken them ahead 1-0, but a ref subsequently disallowed the goal for offside. The game was suspended and called as a 0-0 draw. 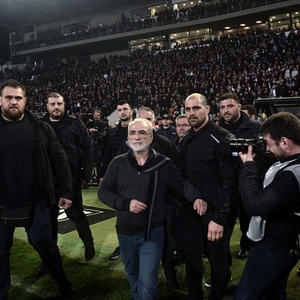