Isha Ambani net worth: Isha Ambani is an Indian student and heiress who has a net worth of $100 million. Isha Ambani is the only daughter of Indian businessman and India's Richest Person Mukesh Ambani and his wife Nita.

Isha Ambani become the world's youngest billionaire heiress at 16-years old in 2008 when her $80 million worth of shares in her father's company Reliance Industries landed her at number two on the Forbes list of top ten billionaire heiresses. She is a student at Yale University studying psychology and South Asian studies. Isha Ambani is a well-rounded billionaire heiress with interests in sports, the arts, business and world issues. Isha's father Mukesh Ambani is the richest person in India with a net worth of $18.5 billion. He is Chairman of the petrochemical and oil company Reliance Industries. Despite the fact that Mukesh Ambani heads a multi-billion Forbes 500 company and is fighting to life his country out of poverty, he is an active father who is often questioned by his daughter Isha Ambani on his company's environmental record. Isha tells her billionaire father that he should re-evaluate his portfolio and eliminate the environment polluting plastics business. 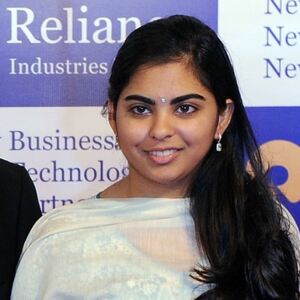