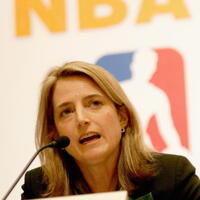 Heidi Ueberroth net worth: Heidi Ueberroth is an American sports executive who has a net worth of $40 million dollars. Heidi Ueberroth is based in New York City. She graduated from Vanderbilt University and moved into the family business almost immediately. She is the daughter of Peter Ueberroth, the former commissioner of Major League Baseball. Her father became commissioner in 1984 and stepped down in 1989. Her father went on to serve as the chairman of the US Olympic Committee from 2004 to 2008. In 1999 Peter led a group of investors that included Arnold Palmer and Clint Eastwood in buying the Pebble Beach golf course for $820 million.

Heidi is probably most notable for spending 20 years at the NBA, during which time she was considered one of the most powerful women in sports.

Salary: As board member of Electronic Arts, in a typical year Heidi is paid a salary of $240,000. She is also given an annual grant of equity. In 2018, as an example, she was granted shares worth around $200,000 as additional compensation.