Gail Kelly Net Worth: Gail Kelly is a South African-born Australian businesswoman who has a net worth of $35 million. Gail Kelly was born April 25, 1956 in Pretoria, South Africa. She is the current CEO of Westpac, one of Australia's 'big four' banks. In 2002, she became the first female CEO of a major Australian bank or top 15 company and, as of 2005, was the highest paid woman in an Australian corporation.

She assumed the position of CEO at Westpac in 2008. Kelly started work at the Nedcor Bank in 1980 as a teller and was moved into an accelerated training program. She started an MBA in 1986 while pregnant with her oldest daughter and graduated with distinction in 1987. In 1990, she became head of human resources at Nedcor (after having given birth to triplets five months earlier). From early 1992 to 1997 she held various general manager positions at Nedcor. The Kellys became disillusioned with South Africa in the mid-'90s and wanted to leave. In June 1997, she flew to Sydney where she held interviews with four of the major banks and was appointed to a senior position at the Commonwealth Bank in July 1997. Kelly started work as the General Manager of Strategic Marketing in the Commonwealth Bank in October 1997. By 2002, she was head of the Customer Service Division responsible for running the Commonwealth Bank's extensive branch network, which led her to be recruited as CEO of St. George Bank (after the death of the incumbent CEO from a heart attack). In 2007, she announced her resignation as CEO of St. George Bank to take up the same position in Westpac from 2008 and she took up the position of Westpac CEO in February 2008. In October 2010, Kelly announced a target to have women occupy 40% of the top 4000 managerial positions at Westpac, a task reported by The Australian newspaper to have been almost achieved by March 2012. She then announced an aim for 50% of the bank's top managers to be women by 2017, the same year that Westpac celebrates its 200th anniversary.

Gender equality isn't the only benchmark to rise under her leadership this year; the bank's net profit climbed to $3.36 billion in the six months through March from $3.05 billion a year earlier. As of 2014, Gail Kelly was listed as the 56th most powerful woman in the world by Forbes. 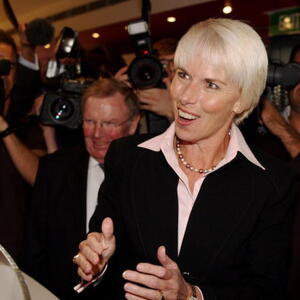