Gabriel Chiu net worth: Gabriel Chiu is a Beverly Hills plastic and reconstructive surgeon who has a net worth of $80 million. Gabriel first gained fame in 2014 when it was rumored that his wife Christine Chiu would be joining the cast of "The Real Housewives of Beverly Hills". In 2021 they were featured prominently in the Netflix series "Bling Empire".

Gabriel Chiu received his degree in Microbiology and Immunology at the University of California Berkeley and went on to complete medical school at the Western University of Health Sciences in Southern California. Dr. Chiu began his general surgery residency in the St. John's Health System in Detroit, Michigan. During training, he transferred to Cuyahoga Falls General Hospital in the Cleveland area of Ohio, where he was chosen as Chief Resident in General Surgery.

After successfully completing his training in plastic and reconstructive surgery, Dr. Chiu returned to California, where he has been practicing in Encino and Beverly Hills. Dr. Chiu enjoys spending his free time with wife, Christine Chiu, and their son Gabriel.

Real Estate: In 2014 Gabriel and Christine paid $4.55 million for a home in Beverly Hills. The seller was hip-hop mogul Russell Simmons who previously lived in the home with ex-wire Kimora Lee Simmons. Gabriel and Christine listed the home for sale in 2015 for $10.5 million. In May 2016 they accepted $8.7 million offer. The buyer was Zoe Saldana.

Today Gabriel and Christine own homes in Malibu and Bel-Air. 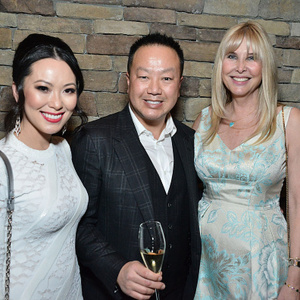