Eric Lefkofsky Net Worth: Eric Lefkofsky is an American entrepreneur who has a net worth of $4 billion. Eric is most-famous for being the co-founder of Groupon. Prior to Groupon he was involved in a number of companies including Lightbank, InnerWorkings Inc., Echo Global Logistics, Inc. and Mediaocean. Today he is also runs a cancer treatment startup called Tempus.

Eric Lefkofsky was born September 13, 1969 in Detroit, Michigan. Eric and a longtime business collaborator named Brad Keywell were angel investors in the daily deal site Groupon in 2008. In 2010 Groupon expanded internationally, taking the company into 48 countries across the globe in less than two years. In December 2010, Google offered a reported $6 billion to acquire Groupon. Eric and Brad turned the offer down.

In October 2011, Groupon raised $950 million in private funding then paid $810 million to employees and investors; Lefkofsky and family were paid $398 million of these funds. In November 2011, Groupon's IPO was the biggest by a U.S. web company since Google, raising $700 million at $20 per share. In August 2013, Lefkofsky became CEO of Groupon.

In March 2011 Eric Lefkofsky was officially a billionaire for the first time.

Real Estate: In January 2015 Eric paid $19.5 million for a lakefront 16,000 square-foot mansion in the Chicago suburb of Glencoe. The property sits on 4-acres.

In September 2018 Eric paid $31 million for a penthouse at the Miami Four Seasons.

In December 2020, Eric bought a mansion on 9-acres in Montecito, California for $33 million. The sellers were Ellen Degeneres and Portia de Rossi. 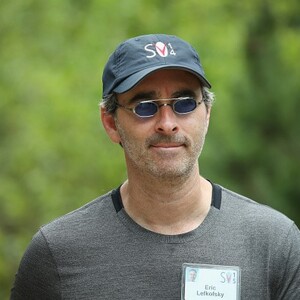