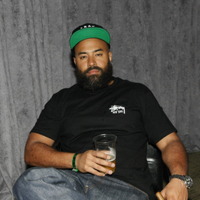 Ebro Darden net worth: Ebro Darden is an American music executive and radio personality who has a net worth of $800 thousand dollars. Ebro Darden began his professional career in Sacramento, California, where he began working for KSFM in 1990. At KSFM, he was initially hired to work as a sales runner and researcher. This eventually led to an internship in the programming department. By the mid-90s, he was working as a co-host for many of the station's shows. From there, he went on to serve as Programming and Music Director, and then Operations Manager, for KBMB in Sacramento. His work in Sacramento led to co-hosting work in Oregon, and finally a position as Program Director at WQHT HOT 97 in New York. As Program Director for WQHT, he is in charge of Hot 97's Summer Jam, one of the most popular summer music series in the country. He also serves as a co-host for multiple Hot 97 programs. Radio Ink recognized him as one of the Best Program Directors in America in 2011. He is currently appearing on a new VH1 reality series about the Hot 97 staff called, "This Is Hot 97".