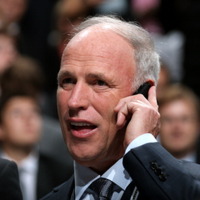 Don Meehan Net Worth: Don Meehan is a well-known American sports agent who has a net worth of $10 million. He is best associated with the National Hockey League Players' Association since he has established himself as a successful NHLPA agent representing several popular hockey players. Born Donald E. Meehan on April 10, 1951, he was educated at Sir George Williams University and McGill University where he played for the Redmen in his final year. Upon graduation, he started to work for a prominent Toronto-based law firm, Blaney, Pasternak. It was in 1981 after he declined a partnership offer from his law firm that he decided to create his own company, Newport Sports Management Inc., which will focus on hockey players. He was unique in his approach since he preferred to detect and contact the families of young stars before being spotted and drafted by the National Hockey League. That's how he became agent for Pat LaFotnaine Wendel Clark, Al Maclnnis, Trevor Linden, Curtis Joseph, Nick Lidstorm, Drew Doughty, Steve Stamkos, Henrik Ludqvist and JaromeIginla. Today, Newport Sports Management represents over 100 NHL players and is one of the most respected sport agencies in the world.