Early Life: Collins' life long interest in cars began when he was a child playing cops and robbers on his bedroom rug with Matchbox and Hot Wheels toy cars as a child. In high school, he drove blue 1966 Ford Mustang. He has degrees from the University of Texas at Dallas in Economics and Finance.

Career: After college, it didn't take Dennis long to realize that owning his own business was not just a better choice, but by far the smarter choice. He began his career in outfitting Jeeps with parts and servicing them in his own shop; Collins Bros Jeep, which he opened in 1984. He also owns Black Mountain Jeep Conversions.

In addition to working with Jeep parts and vehicles, he also works with Healeys. He has owned or worked on over 200 of the vehicles, including Goldie, the 100-6 show car. He is currently the owner of the very first Nash-Healey, which was produced in 1950. Many people believe that the car is the first true sports car, though this has been under debate for some time.

Jeep is his primary business, but his passion for classic cars jhas never abated. For every Jeep sold or serviced in his shop, a classic car finds a new home due to Dennis' knack for locating rare, low mileage, classic cars and selling them to people who are searching for them.

Collins has appeared on the reality show "Fast N Loud" with fellow car enthusiast and friend, Richard Rawlings. He met Rawlings in 1996 during a Harley Davidson invitational involving a ride from Dallas to Daytona and they've been friends ever since.

Personal Life: Dennis Collins and his wife Kim live in Texas and have been married since 1993. They have two children who are grown and living on their own.

He and Richard Rawlings are also Cannonball record holders. Collins and Rawlings once held the world record for the fastest time in the Cannonball Run, until their record was in 2013. To break that record, which had stood since 1979, Rawlings and Collins traveled 2811 miles from New York to Los Angeles in 31 hours and 59 minutes. That equates to an average driving speed of 87.6 MPH.

Real Estate: Collins' home is a sprawling two acre property that includes a 7,964 ranch-style home as well as a freestanding two building garage complex that is climate controlled and large enough to store more than 20 cars and contains a large workshop. There's also a private baseball diamond that can double as a helicopter pad, a fenced dog run, and world-class outdoor facilities. The yard includes a professional sound system, a double-sized pool in a unique V shape, a fire pit and double-sided fireplace, and a fountain that converts to a hot tub for 16.

The main house has a gourmet kitchen, three bedrooms, two-and-a-half baths, and a guest wing with its own kitchen and living room, plus one-and-a-half baths and one bedroom. Other features include skylights, three fireplaces, a wine cooler, a wet bar, and a dream closet. The master suite's 600-square-foot boutique closet is accessible by a private staircase and features a sitting room and a balcony overlooking the pool. The home is its very own resort, sitting in the quiet town of Murphy, Texas, about 30 miles from downtown Dallas and 38 miles from DFW Airport. The home was put on the market for $1.988 million in 2017.

Collins and his wife built their new contemporary home on a golf course. 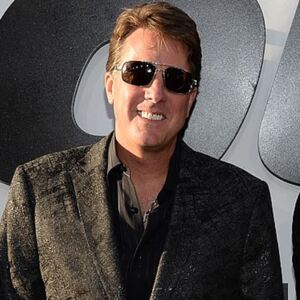