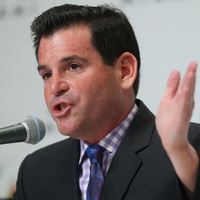 David Samson net worth and salary: David Samson is an American sports executive who has a net worth of $200 million dollars. David Samson was born in Milwaukee, Wisconsin, and grew up in New York City. He went on to graduate from the University of Wisconsin-Madison with a degree in Economics. He then earned his law degree from the Benjamin N. Cardozo School of Law. He launched a news distribution company in the early 90s, and then worked for Morgan Stanley as an investment advisor in the late 90s. In 1999, he became the Executive Vice President of the Montreal Expos. He and his stepfather ran the Expos until 2002, when they finalized a deal to purchase the Miami Marlins. The negotiations surrounding the purchase of the Marlins, also involved moving the Expos to the United States, and shifting nearly 50 employees between the two teams. A lawsuit was subsequently filed by 14 of the Expos minority partners against Samson and his stepfather, but the charges were later thrown out. He has been the subject of a great deal of controversy, due to the construction of a ballpark for the Marlins and his own blunt, outspoken tendencies. In January 2014, it was announced that David Samson will be a contestant on the upcoming season of Survivor.