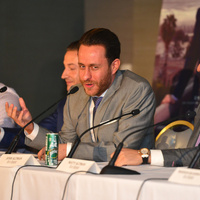 David Parnes net worth: David Parnes is a British real estate agent and reality television personality who has a net worth of $6 million dollars. Parnes, who is originally from England, has a successful real estate firm with his partner, James Harris called Bond Street Partners. Their gross sales for 2013 alone exceeded $120 million, with another $150 million in escrow. The pair are also the most recent addition to the hit Bravo reality television series, Million Dollar Listing: Los Angeles that begins in August 2014. Originally from London, David Parnes has an extensive and successful background in finance and real estate. He graduated with a Bachelor of Arts with Honors in Economics and Politics from the University of Manchester, and started his career working at a hedge fund before going on to amass a private portfolio of real estate assets in Europe. He and his firm, which was founded with James Harris in 2011, specialize in high-end residential real estate and investment properties in The Hollywood Hills, Beverly Hills, Bel Air, Pacific Palisades, Malibu, Brentwood and The Greater Los Angeles region. In addition to residential sales, David has an in-depth knowledge of commercial real estate. In 2013, he and James' sold 8436-8452 Melrose Place, a significant commercial building that is home to Oscar De La Renta, Chloe and The Olsen Twins' store, The Row, among others. They are in the process of developing major investment properties in Bel Air and the Westside.