David Griffin net worth: David Griffin is an American professional basketball executive who has a net worth of $4 million. David Griffin was born in Phoenix, Arizona in 1973. He started his career as a tournament director at the NIKE Desert Classic pre-draft camp. Griffin worked as an assistant coach at Scottsdale community College and worked in the press information team for the 1996 Olympic Games.

He was with the Phoenix Suns for 17 seasons starting as an intern and working his way up to senior vice president of basketball operations. Griffin joined the Cleveland Cavaliers as vice president of basketball operations in 2010. In 2014 he became the acting general manager and later that year he was named permanent, full-time general manager. Some of his big moves with Cleveland included bringing in coach David Blatt, drafting Andrew Wiggins, signing LeBron James, and trading for Kevin Love in addition to winning the 2016 NBA Finals and finishing second in the NBA Executive of the Year voting for 2014-15. Griffin left the Cavs in June 2017 after a contract agreement was not reached. 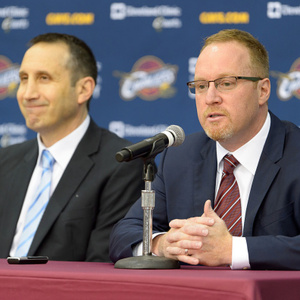