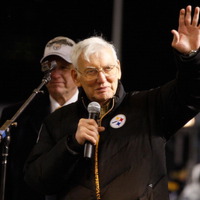 What was Dan Rooney's Net Worth?

Dan Rooney was an American sports executive who had a net worth of $500 million at the time of his passing on April 13, 2017. Dan Rooney was the son of legendary founding owner of the Pittsburgh Steelers, Art Rooney, and held the positions of president, owner, and chairman in the Steelers organization.

Daniel Milton Rooney was born on July 20, 1932, in Pittsburgh, Pennsylvania. He was immediately instilled in the Pittsburgh Steelers organization as a young boy assisting his father at Pitt Stadium and Forbes Field. Dan grew up in the North Side neighborhood of Pittsburgh and went to North Catholic High School and had success as the team's quarterback. He also spent some time coaching for St. Peter's Elementary School football team. He was lucky to have some impressive names for his mentors such as Joe Carr, Fran Fogerty and Ed Kiely. These men all contributed to Dan's knowledge of football business. He graduated from Duquesne University knowing that, without a doubt, he wanted to pursue football as his lifelong career.

Dan Rooney started out as director of personnel for the Steelers in 1960. And by 1969, he had already proven himself by managing every aspect of the team at a high level. Dan was appointed as team president in 1975 and given full operational control of the franchise. His father remained with the team until his death in 1988 when Dan stepped up as a very active owner behind the scenes while mostly avoiding the spotlight.

Dan Rooney was credited with helping to end a strike that lasted half the season as a lead negotiator of the collective bargaining agreement of 1982. He was also one of the main driving forces behind the implementation of the salary cap in 1993. The "Rooney Rule" was named after Dan for his efforts in giving minority candidates opportunities and fair shakes at coaching positions and general manager vacancies.

His open and efficient managing style contributed to some very successful Steelers teams under his tenure in which the organization won 15 division championships, eight AFC championships, and an NFL record six Super Bowl victories. Dan Rooney was enshrined in the Pittsburgh Steelers Hall of Honor, and in 2000, elected to the Pro Football Hall of Fame for his contributions to the game. In 2011, he was named to the Pittsburgh Pro Football Hall of Fame. 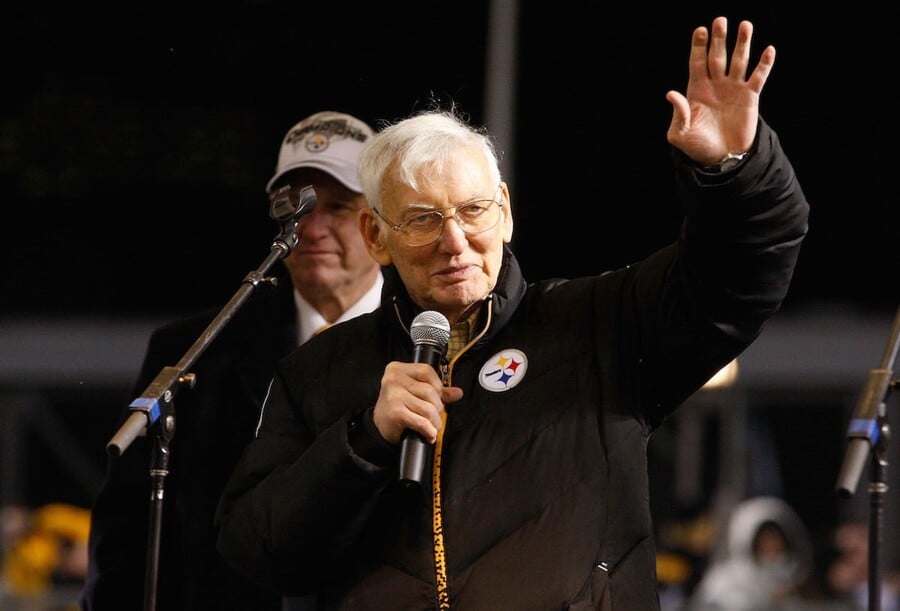 Dan Rooney was a Founding Chairman of The Mentoring Partnership of Southwestern Pennsylvania. He was the benefactor of the Rooney Prize for Irish Literature and Vice-Chairman of the American Ireland Fund. Dan was named to the list of most influential individuals in Pennsylvania politics by PoliticsPA in 2002 and became an honorary Commander of the Most Excellent Order of the British Empire in 2008. In 2009, he won the "Jack Horrigan Memorial Award" from the Pro Football Writers Association for his qualities and professional style in helping pro football writers do their job. In 2016, Dan Rooney was recognized with the Lifetime Achievement Award from the Jackie Robinson Foundation.

Dan Rooney was married to his wife, Patricia Regan, whom he met while she was working in the Steelers office, for 65 years. The couple had nine children together. Actors Kate and Rooney Mara are Dan's grand-nieces.

Dan Rooney was the United States Ambassador to Ireland up until 2012.

Dan Rooney died at the age of 84 on April 13, 2017, and was buried in the Christ Our Redeemer Catholic Cemetery in Ross Township, Pennsylvania. Former president Barack Obama and former secretary of state John Kerry attended his funeral.