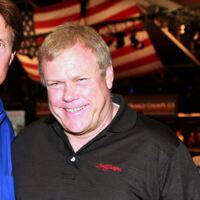 Craig Jackson net worth: Craig Jackson is an American entrepreneur who has a net worth of $300 million dollars. Craig Jackson was born in Arizona, and grew up around cars. His father co-founded the Barrett-Jackson Collector Car Auction with Tom Barrett in 1971. The auction was originally called the "Fiesta del Auto Elegance". The auction was created as a fundraiser for local charities, and grew from there. In 1972, they began auctioning off cars, beginning with Adolf Hitler's armored Mercedes-Benz 770K. The car sold for over $150,000, a huge amount in the early 70s. Craig Jackson began working for his father's company very early on, and took over operations entirely in 1997. He has since added online bidding and the auction airs on the SPEED channel. He is known for his incredible attention to detail, his complete professionalism, and for his excellent personal car collection. He has won numerous business awards, and has appeared on Motor Trend's "Top 50 Power List" for the automotive industry, two times. To date his auction has sold over $1 billion worth of cars. More than 200,000 people attend the auction annually, generating around $90 million worth of revenue for Barrett-Jackson. And that's before their company takes a cut of sales.

Craig Jackson's Car Collection: Craig houses his impressive car collection in what has been referred to as one of the most-expensive garages in the world. He spent millions building the garage that features a circular rotunda showroom that was modeled after a the wheel of a 1967 Shelby Cobra. The walls are leather and the floor is terrazzo-coated. A custom heating and cooling system was built to protect his cars from scorching-hot Scottsdale days and freezing cold nights. He owns well over two dozen cars, mostly of the muscle-car variety.