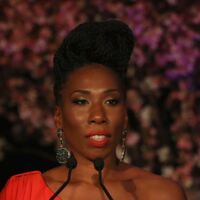 Brandi Harvey net worth: Brandi Harvey is an American executive and activist who has a net worth of $5 million. Brandi Harvey was born in August 1982. She is the daughter of Steve Harvey and his first wife Marcia Harvey. Brandi has a twin sister named Karli and a younger brother named Broderick Harvey Jr. She also has a half brother, two stepsisters, and a stepbrother. Brandi Harvey earned her bachelor's degree from The Ohio State University. She has worked for the organization Young, Fit and Fly which works with young women to improve their health and self-confidence. Brandi Harvey became the executive director at The Steve and Marjorie Harvey Foundation in 2012 and has also worked as a wellness coach, a public speaker, and an author. She launched her wellness initiative Beyond Her in 2018. She also runs the Steve Harvey Mentoring Program for Young Men as well as Girls Who Rule The World mentoring Program. She once competed in an NPC amateur bodybuilding contest.